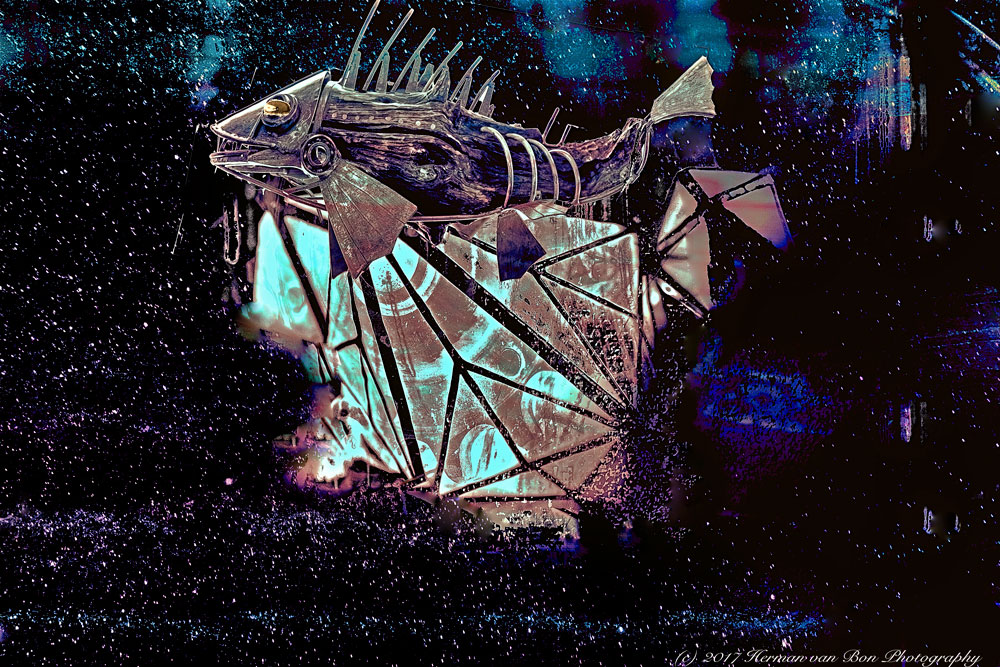 ‘The fish that went fly-about’  is inspired by the Australian aboriginal legend ‘The fish became the moon’. In the time known as ‘Dreamtime’ the world took shape, the ancestors retired into the earth, into the sky, into the clouds and into the creatures, and planted in the earth, as the ancestors call it, the ‘seed power’. Every creature and every mountain and every stream and waterhole and rock and river is implanted with this seed, which gives off a vibration, and this is the Earth’s inner dreaming. It is sacred, like so many of the Dreamtime stories. ‘The fish became the moon’ is a story about two sisters catching a fish and seeing it climb into a tree and float into the sky where it became round and slowly disappeared behind the horizon. There are BTW different versions of this tale in Arnhems Land, East of Darwin as I discovered during 6 weeks walkabout in 1994.

The fish in this photo-graphic is a sculpture of artist Ulrich Riek from Napier.

From 11 June on show in Walker Bay Art Gallery in Hermanus. Framed 90 x 60 cm. Only ONE print available.

" I like to explore the possibilities and limits of digital art, I just let it flow to see where it can go, sometimes the end result appears quickly, sometimes the creative process takes months and other times  the creation dies in its own beauty".  View all posts by Herman van Bon Photography